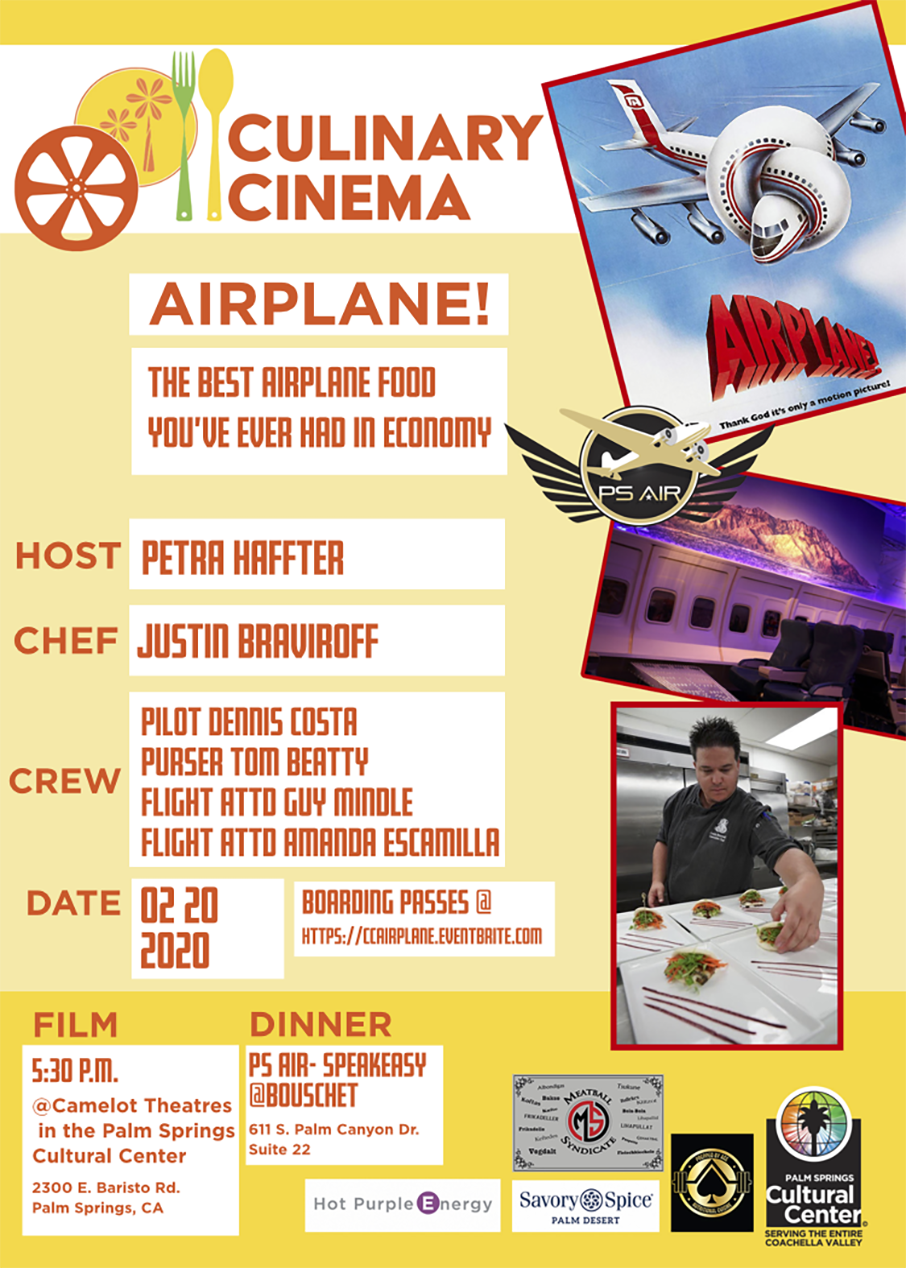 Travel Around The World- While Tasting Mouthwatering Dainties From the Most Memorable Food Movies.

THE HUNDRED FOOT JOURNEY w/ Chef Daniel of “Daniel’s Table.”
August 21
The culinary cinema adventure begins at the Camelot Theatres inside the Palm Springs Cultural Center on August 21, 2019 with “THE HUNDRED FOOT JOURNEY.” A wild war arouses between a relocated self-made Indian Chef and an established noble French Cuisine Restaurant owner in the most charming French countryside. Following the film join us on stage of the Historic Camelot Theatre for a dinner prepared by Chef and Caterer Daniel from DANIEL’S TABLE famous for his cross-cultural taste: “I feel compelled to bring the fruits of the trees and the bounty of the fields to my guests. Sourcing only grass-fed animals and wild fish for our ‘made from scratch’ dishes and creating a lasting experience for everyone involved. Much focus, hard work, research, dedication and consistency goes into providing the best sourced foods from local farmers, ranchers and great fisherman that share in the passion of not trading their great standards in for a smaller prize,” said Chef Daniel.

MOSTLY MARTHA w/ Chef Teresa of IL GIARDINO
September 18
Darling of the culinary scene in Hamburg, there is a gap between Martha’s exquisite food and her unforgiving rigid personality. What could be better than to continue the Italian adventure with a warm taste of a Sicilian family prepared by Chef Teresa at IL GIARDINO. “Talento naturale! – I grew up in the kitchen. I played with food. I love food. When the families were gathering once a week to make bread, we kids were ready to play with the dough. The first thing I learned was Tiramisu. On Sundays our family cooked for the School, later I worked for the nuns. Volunteering and helping refined my cooking. I might be small but I can do big things, ” said Chef Teresa.

TORTILLA SOUP w/ Chef Amanda Escamilla
October 16
TORTILLA SOUP is a charming family story of a Mexican patriarch who raises three amazing and successful daughters accompanied by voluptuous food photography. And there is one rule in the family you should never forget: Don’t mess up with the tradition of a Sunday Dinner. Following the film you’ll fall in love with guest Chef’s Amanda Escamilla’s Farm-To-Table Mexican cuisine.

THE SCENT OF THE GREEN PAPAYA
November 20
When you arrive you‘ll smell THE SCENT OF THE GREEN PAPAYA already in the theater. It is a film so placid and filled with sweetness that watching it is like listening to soothing music. The film takes place in Vietnam between the late 1940s and early 1960s, and is seen through the eyes of a poor young woman who is taken as a servant into the household of a merchant family. She observes everything around her in minute detail, and gradually, as she flowers into a beautiful woman, her simple goodness impresses her more hurried and cynical employers. Roger Ebert called it a film of great visual beauty…it is like seeing a poem for the eyes. Afterwards- we will gather at 533, the Viet-Fusion restaurant of Chad Garner. And yes! Green Papaya will be served. Chef Chad Garner says “My passion for the fresh ingredients and bold flavors of Vietnamese cuisine combined with my personal love of creating edible art has led to 533’s current incarnation of Viet-fusion: time-honored Vietnamese cuisine infused with his own culinary flair for artful presentation stimulating all of the senses.” … and then on December 18 to whet your appetite … we are planning for a the holidays a special gift to be unwrapped once it gets closer… stay tuned.

SOMETHING NEW. SOMETHING DIFFERENT.

I love my Palm Springs neighbors and community and I had the strong desire to create something new and different for all of us. I wanted to give back. And I’m happy to say, that I found the best partner and co-producer possible for my idea of Culinary Cinema: PALM SPRINGS CULTURAL CENTER.

As a passionate filmmaker and foodie I want to pair unforgettable food movies with local Chefs and restaurants. And together with our guests we want to travel around the world while tasting mouthwatering dainties from the most memorable food films.

We will begin our adventurous CULINARY CINEMA EVENT SERIES at the Camelot Theatre on August 21, 2019 with “THE HUNDRED FOOT JOURNEY.” A wild war erupts between a relocated self-made Indian Chef and an established noble French Cuisine Restaurant owner in the most charming French countryside.

When the end credits have finished, join us on stage for a Dinner prepared by Chef and Caterer Daniel Villanueva from DANIEL’S TABLE - famous for cross-cultural taste:

“ I feel compelled to bring the fruits of the trees and the bounty of the fields to my guests. Sourcing only grass fed animals and wild fish for our ‘made from scratch’ dishes and creating a lasting experience for everyone involved. Much focus, hard work, research, dedication and consistency goes into providing the best sourced foods from local farmers, ranchers and great fisherman that share in the passion of not trading their great standards in for a smaller prize.”

The news this time is connected to my photography. In October, I was a winner of PHOTO INDEPENDENT in DTLA. A big surprise and a wonderful recognition. And, after many visitors to my social media and website have asked for more background information and hints to screening dates of my travel films, I have decided to start Petra’s World as a facebook page.
DIE FARBEN DER WUESTEN (German version of THE COLORS OF THE DESERTS) is now available on Amazon.de. The English version will follow in 2019 on amazon.com
My travel films have led me to the most spectacular places. Instead of souvenirs, I brought an endless collection of pictures home. Stills I shot while on the road. Until now, I have only sold my photographs upon request. For this season I have picked three of my favorite landscape pictures from three different shooting trips in three different sizes. Enjoy them for yourself, or as a gift.

* size might slightly vary depending on photo paper choice

THE REVIEWS ARE COMING IN FOR "CALIFORNIA DREAMING."

Petra Haffter's five-part series, "California Dreaming" by Volker Oesterreich.
She has an eye for the unusual, for detail and is always good for a surprise. And yet, she is able to work out the large-scale interconnections in her feature films, TV police procedurals, documentaries or multi-part series. That is what German-born filmmaker Petra Haffter, who has been living in Los Angeles for some 15 years, is doing in Arte's five-part series "California Dreaming", which aired yesterday. If you look more closely at the US state, it's a paradise of creativity. This not only applies to the hip people who work for the many Internet giants and start-ups, but also to the vibrant cultural scene. There are also breathtaking landscapes of the Pacific, in the deserts and high mountains. California stands for the other America, which does not ascribe to the fake populism of a Donald Trump, but upholds the social commitment to liberty and to protecting the ecology of their land. That is why the incumbent president is a thorn in the side of this state. Trump's tax reform was directed against California, as was his immigration policy. When he condemns people of the Middle East, he does not realize the father of the founder of Apple Inc., Steve Jobs, came from Syria. California's economy, including agriculture, is based on legal and illegal migrants. And California has the highest percentage of "Dreamers", especially Latin Americans. This magnet for the creative community, with its love for thinking out of the box, attracts innovative spirits from around the world. Petra Haffter, who also teaches at a film academy in Los Angeles and has just been a guest at the Berlinale, travels along the roaring Pacific coast in the first episode. Today, we head out to the mountains to visit NASA researchers and beekeepers. A fascinating mix that includes striking images of the Golden State.

THE REVIEWS ARE IN FOR THE COLORS OF THE DESERTS

"Mesmerized by deserts since her adolescence the director now embarked on a journey,to look into their geological, historical and metaphysical conditions… “Here the vastness of the landscape, there the macroscopic composition of individual particles: Petra Haffter is always changing the perspective between sensory perception, esoteric effects and geological facts, between the big picture and the tiny detail. And she always highlights the extreme challenges these landscapes are posing to its inhabitants…”  “The series is addictive. After watching this you want more: More Colors of the DESERTS on different continents.”  (Anke Sterneborg, Die Sueddeutsche, Munich, Germany)

“Petra Haffter and her team explore geography, history, light and shadow to mirror present human existence.  A cycle that not just entertains but also trains the eye… Sand dunes recount ell from the course of the time, canyons from the force of water…” (Peter Claus, Kulturradio Germany)

'THE COLORS OF THE DESERTS - Uyuni" awarded top camera prize